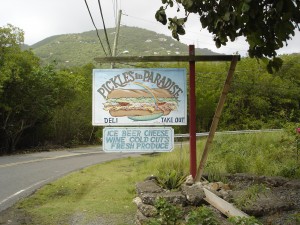 Travelocity’s Gnome was a visitor to our favorite restaurant/deli on the Coral Bay side of St. John, Pickles in Paradise! Â The web site ‘On-St. John’ did a great write up about the deli and the owner, Beverly Melius, “Beverly, a former New York interior designer who moved to St. John in the 1970â€²s, ran the original Pickleâ€™s for a decade before leasing out the building to various other businesses starting in 2003.

Now she is back, serving breakfast lunch and dinner 7 a.m. to 7 p.m. with breakfast burritos and Belgian waffles, deli sandwiches and wraps, and all heavy on the homemade side.

Beverlyâ€™s friend, Jean, a commercial fisherman from Alaska, also spends six months a year on St. John and she brings Copper River wild Sockeye salmon to Pickles, 600 pounds of it from her most recent trip. $18 a pound. Frozen now. Shipped down fresh in season.

â€œIâ€™m amazed at the response since we opened about three months ago,â€ says Beverly. â€œWeâ€™veÂ got a lot of Coral Bay customers, but weâ€™ve got plenty from Cruz Bay who come all the way over for Â our food.â€

Having a scone and coffee under the glorious yellow flowering tree and being able to observe the island activity, both human and four legged is one of my favorite activities on St. John. Â Thank you Pickles!